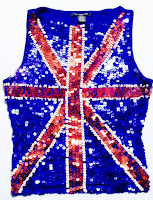 I blame my magpie eye. It immediately spotted the shimmering Union Jack, ignominiously buried within a clearance rack. My practical side, which screamed “Where on Earth will you ever wear this?” was instantly muted by the irresistible ripple of sequins. The sparkly treasure hung in my closet (admittedly, for several months), awaiting its dramatic debut.

Well, better sense, what do you know? The Duran Duran concert is the ultimate occasion for sparkles. (Author’s Note: Like my character, Kate, I am a die-hard Duranie!) Momentarily, my better sense attempted a resurgence by reminding me of my inclination to wear very lightweight clothes to said concerts, even in mid-winter. We Duranies like to dance (well, dance as much as one can within the approximate half-inch gap between you and your neighbors). Sure, I told my better sense, this top is made of wool, but it is sleeveless. It will be fine. Better than fine, perfect! My mind’s eye was already basking in the glow of the reflections from thousands of red, white and blue mirrored discs. “When she shines, she really shows you all she can….”


Decked out in a short black skirt, platform sandals, red-glittery nails and shimmering cherry-red (of course) lips, I was ready for the saga that precedes any DD concert at House of Blues. Perhaps, if you are not a Duranie, this ritual may seem a bit extreme, but this is Duran Duran! Just like a few short years (ok, decades) ago, when we used to camp overnight at TicketMaster to get in queue for the coveted first-row tickets, the boys require a bit of investment. 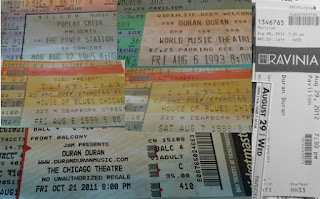 Although I had already fought the epic battle online to secure tickets, that is but the first step. Next is to time dinner at Crossroads (the HOB restaurant) just right, so you can get the golden ticket to enter the preferred queue. Then, stand (or lean) with your fellow crazy Duranies for a few hours, swapping stories of stalking, gawking, and (gasp!) talking with the band.

My story of touching Simon’s shoe (after being pushed headlong into it by a very enthusiastic crowd behind me) holds little merit with this crowd. Of course, I could brag about the many times the band and I have made eye contact during all the concerts I’ve attended (and there have been quite a few!), but that would be telling.  Inevitably, there is at least one who holds a mega-platinum ticket that allows for some special appearance or other. Envy can be very draining, so we mere mortals steer the conversation to our guesses of the set list and encore choices, favorite hairstyles, and debate the best side B-sides (Secret Oktober usually wins, especially when taking the live performance into consideration).

Suddenly, the security team moves into position and the crowd holds its breath. For a few moments, order is maintained. Then, the doors open, and pure chaos is unleashed. It is every Duranie for herself, as we race towards the stage. Sure, some may fall, but we must charge ahead! Parted by a Duran divining rod, we align ourselves along the stage. Of course, I am dead center, unequivocally team Simon LeBon. My obliging husband is beside me, firmly entrenched in the second row. Within moments, the room is filled to capacity. Music is blaring through the speakers, and I contemplate what type of wine to have with the concert. As the noise level increases, so does the temperature. I’m feeling quite warm in my sparkly top, I grudgingly admit. Warmer and warmer, until the room begins to spin.

OMG – I’m going to faint! “Don’t let them take me,” I babble incoherently. In my mind, loops from the Sing Blue Silver VHS (yes, I still watch it on a VCR!), where overcome fans are passing out and removed from the concert hall, torment me. “I’ll be fine,” I warble as I sink down to the floor. My fellow Duranies are very supportive, getting water bottles for me from the waitress at the edge of the stage, and stepping back to provide some air. An opportunistic fan attempted to play fowl by rushing in, pretending to be a nurse. The crowd around me sensed the deception, and I’m proud to say she was shunned to the back. Fortunately, by the time the show began, I was back on my feet and ready to dance. Phew! Ok, better sense, you may have been right….that is, until I find myself shaking hands with Nick (swoon!) after the encore. Semper Sparkles!
Newer Post Older Post Home