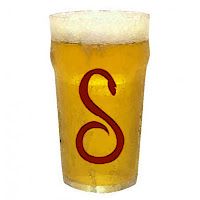 Snakebite. Illegal. To my eighteen-year-old self, visiting England for the first time, there was only one possible response. Yes, please! Oh, teenagers and illicit activities, like moths to a flame. It didn’t hurt that the pub provocateur was a totally hot Brit! ...and it turns out, snakebites are quite scrumptious.

Half lager and half hard cider, the drink is a lovely golden-amber color with a refreshingly crisp taste. The quintessential summer drink, a snakebite is effervescent to the palate and conversation. The drink’s illicit history--one that is rumored to cause intensified intoxication--adds to its allure. Some say it is the mix of fruit and grain bases that causes the alleged reaction. I have yet to experience this enhanced inebriation…and not for lack of trying.

Years later (I’m not confessing to exactly how many decades have passed since that first temptingly tingly taste), I’m still enamored by the drink. Years later, it is still illicit in some areas in England! During our last trip to Oxford, I visited two of my favorite pubs – The Bear and Turf Tavern. The server at the former, to my great disappointment, had never heard of the drink. The jovial host at the latter, to my great relief, was well acquainted with a snakebite. He confessed he was prohibited from selling one, but suggested perhaps ordering a half-pint of lager and a half-pint of cider. What a patron does with said glasses was her own business. Naturally, I took his advice. The thrill of a forbidden pleasure came rushing back, as I needlessly looked over my shoulder before pouring the elixirs together into an empty pint glass, surreptitiously left on the counter.


Of course, I could make these at home, but it just isn’t the same (I’ve tried). There is something about the publican’s pour of the cider and the lager, cool and ambrosial, into the shapely curves of a pint (or half-pint, if doing it on the sly) glass, that can’t be replicated in an American kitchen from refrigerated bottles. Maybe it is the brief reconnection with the carefree days of my youth, or maybe it is the taste of something so quintessentially British - who can ordain the ethereal? To me, snakebites will always be an enchanting taste of felonious heaven. Cheers!
Newer Post Older Post Home