Tis the Season to be 80s 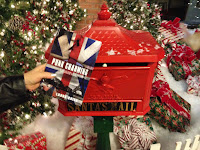 Punk Charming went to the Ice House for a holiday photo shoot. Back in the 80s, I spent a lot of time (and money) at this mall in December. My leather fringe jacket wasn't very warm (but totally bitchin'), so after the two-block walk from Just Pants, it was a great place to linger indoors. Benetton was one of the busiest stores at this time of year, with stacks and stacks of neatly folded sweaters in cubes like a pixelated rainbow. Crabtree and Evelyn occupied a vintage train car, tempting shoppers with lovely lemon biscuit tins and the alluring aromas of rose and lilac.

As I skated down memory lane, I heard Last Christmas play on the radio. I'm talking the 1984 original (and the best) by the late, great George Michael. It made me realize that truly, tis the Season to be 80s. The most awesome decade ever produced the plethora of holiday classics that make the season extra merry today.

Here's just a partial list of festive faves from the mixtape decade: